At the end of August 2022, our colleagues Michaël dM and Pierre VK realized a triple mission!

The first step was to Kilengi, 2 days away from Kinshasa (and what a road!!!). Our two volunteers repaired the solar installation supplying the health center as well as the one supplying some classrooms which were not working anymore since the lightning struck in April 2021. They also replaced a solar pumping system that brings water from a well to the village center, to everyone’s great joy!

In Kabinda, the second stage of this mission, our volunteers rehabilitated the photovoltaic system that powers the Radio Veritas transmitter. They also replaced the regulator and rebuilt the radio’s electrical system, which had become outdated.

Supported by the Diocese of Kabinda, Radio Veritas is a socio-educational radio station that broadcasts over a range of about 250 km around Kabinda, in Kasai Oriental.

A few steps away from the radio station, our volunteers also repaired and restructured the solar panel installation of the youth Center, rebuilt the switchboard, revised the lightning conductor installation, and made an inventory of the electrical material needed to equip the premises.

Throughout this mission, Michaël and Pierre trained a team of technicians who will be in charge of the maintenance of the radio installations and the realization of the electrical installation of the Youth Center.

We thank Norbert Mervilde, director of the radio and the youth center, and his collaborators for the beautiful tribute to our late colleague Claude Gastout, who initiated this project and many others! 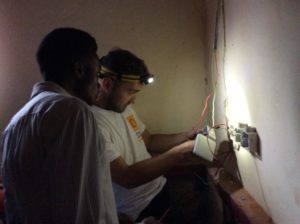 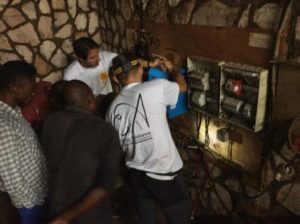 Cibombo is a camp for Kasaians refugees expelled from Katanga, managed by the IPAMEC association supported by the Abbot Stanislas Kanda, about ten kilometers from Mbuji-Mayi.

Two Energy Assistance missions, in 2009 (project 163) and in 2014 (project 371), have provided photovoltaic installations and rainwater pumps to improve the quality of life of the 15,000 inhabitants of this camp.

During this third stage, our two volunteers carried out an inventory of the installations. They also analyzed the needs and collected the necessary elements to develop a larger project, including the power supply of a hospice under construction.

Back in Mbuji-Mayi, they were warmly received by the Governor of Kasai Province. 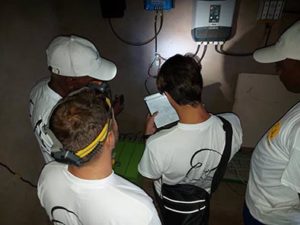 At last, a very short visit to Kinkole allowed them to collect useful information (layout, needs, dimensions…) to allow the two volunteers who will go there very soon to prepare their mission.

A big thank you to our volunteer colleagues Michaël dM and Pierre VK for their efficiency and for this fantastic mission!