Electrification by solar panels of the Panzi Hospital in DRC 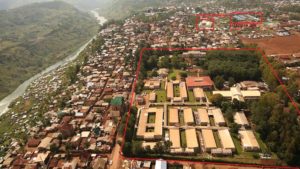